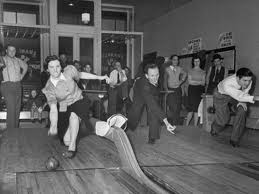 by David A. Tracy

Judge John Hurley of Broward County, Florida this week ordered a domestic assault suspect to treat his wife to a night of bowling and Red Lobster, and to start marriage counseling within a week.

The man appeared before Judge Hurley at a bond hearing.  The man’s wife appeared and told the Judge she wanted her husband to come home.  When questioned by the Judge, she said the two were arguing because the man had failed to wish her a happy birthday.  According to the arrest affidavit, the man pushed his wife onto their couch and put his hand on her neck. He held up his fist to hit her, but never struck her.  The woman called police.  It was the second time she had called about a domestic disturbance with this man.

The woman told Judge Hurley under questioning that she was not “hurt,” and that she was not afraid of her husband.  Further questioning by the Judge revealed that the woman enjoyed bowling and eating at Red Lobster.  The Judge then declined to enter a “no contact” order and issued his unusual ruling.  “He’s going to stop by somewhere and he’s going to get some flowers,” Hurley said. “And then he’s going to go home, pick up his wife, get dressed, take her to Red Lobster. And then after they have Red Lobster, they’re going to go bowling.”  The next day, the couple is to select a marriage counselor and make an appointment.

See a video of the bond hearing here.

I understand Judge Hurley was trying to be creative in what he considered a low-risk situation.  However, the ruling demonstrates a lack of understanding of the cycle of domestic violence.  It was insensitive of the Court to treat this as a minor matter simply because the woman did not suffer visible physical injuries, and did not claim an ongoing fear of her husband.

The arrest affidavit in the Broward County case described all the elements of a domestic assault and battery.  The cycle of domestic violence suggests this violent episode will be followed by a period of remorse by the abuser.  If the cycle is not broken at this time, it enters a new phase.  The victim forgives the abuser, and the relationship will seem repaired for a time.  For those caught in the cycle, the stress will build.  The abuser will become increasingly possessive, controlling and threatening, until the next violent episode erupts.  The cycle is once again complete, and another phase begins.

The problems for this Broward County couple will not be fixed with flowers, dinner and bowling.  Counseling would help, but without followup, it won’t likely last beyond one or two sessions.  Assuming the facts in the affidavit to be true, Judge Hurley ordered an abuser to take his victim to dinner.  The cycle of domestic violence will continue.

Please leave your comments, whether you agree or disagree.